Four years after the release of Breathing Architecture, Garden City Mega City continues to chronicle the pursuit of sustainable architecture and planning by Pacific-based architecture firm WOHA. Folding in subsequent years of creative proposals–both built and unbuilt–this new publication focuses on the environmental and social challenges of hyper-density in tall buildings. Author and photographer Patrick Bingham-Hall helps convey the nucleus of WOHA’s thesis that revolves around a departure from the notion of a city as a series of extruded property lines from a planar urban realm of activity. These architects have pursued the investigation of the cityscape as a three-dimensional entity where distance from the street does not necessarily equate to an isolation from proximity to program and public space.

Looking through WOHA’s lens, the city has the potential to operate as a series of layers that pull a sustainable ecology off of the now-crowded sidewalks where city life has propagated over the course of the last century. The range of projects and urban corollaries strike a familiar chord to the imagery of Hugh Ferriss, Raymond Hood, Harvey Wiley Corbett or Rem Koolhaus. But where previous designers have envisioned the future of cities as unbridled products of expansion and possibility, WOHA approaches the next era of urban development with an added facet of caution, bred from observing the rapid urbanization in Asia and the rise of the Mega City.

“In the face of widely acknowledged malfunction, massive cities are still being constructed in accordance with a rigidly enforced, yet blatantly outdated and inappropriate planning template. The extraordinary recent growth of these cities in unprecedented, and WOHA are calling for a correlative response by architects and planners… for research and proposition and experimentation, and for a swift all-encompassing rethink of an entrenched city-building template.”

While some like James Ehrlich and EFFEKT are focusing on providing sustainable lifestyle options through alternative development patterns, WOHA squares up to the existence of the mega city as an unavoidable outcome of the next century that can either pave the way for our environmental decline or provide a new means of achieving density within the covenants of nature’s dynamic equilibrium. By bending to the insistence of natural systems and integrating activity on a series of reconstructed ground planes, WOHA’s buildings offer new possibilities for urban ecologies that question the prevailing assumptions of what it means to exist in a city–and what cost must be levied on the planet for our cities to exist.

WOHA’s integration of nature pushes beyond the planar application of green roofs that development in the U.S. is only beginning to acknowledge and utilize. Each sketch, project and competition entry finds green space designed into every elevation, woven through the crevices of open halls and hung from each balcony to both embrace the building and reach out for a connection with the biosphere beyond at the same time. The firm has laid out a case not for a prescription, but a process. With the conjecture that it is the rampant proliferation of western high rise towers that is partly to blame for the growth of unsustainable cities around the world, the mindset of the book demands that every site needs a fresh look its possibilities and parameters alike.

“Building typologies need to be rethought, as part of a sustainable synergistic city that shares and reciprocates. Architects and planners must consider such things as energy production, water and air rights, and the stimuli for renewing ecosystems and bio-diversity. Buildings should contribute to the city, both socially and environmentally, and engage in remediation where necessary.”

The chosen format of the book in outlining a collection of positive, design attributes is reminiscent of other planning manifestos like The Smart Growth Manual, Sustainable Urbanism or even The Pattern Language. A key difference is the use of their own projects as anchor points to illustrate the mentality in action and keep focus on the archetype of a low-resource, hyper-dense settlement pattern. This aspects helps to underscore what is arguably the most important message of both the book and WOHA’s work: the consistent echo of viability. While unquestionably forward-thinking in relation to the profession at large, the case made in these pages isn’t a collection of hypothetical musings for which the realm of feasibility is ages ahead. As the existing work of the firm has already begun to establish, the road to a more sustainable urban environment is not restricted by the threshold of plausibility.

The recommendations also include a new method for comparing the sustainable results of new urban scale projects. Arguing that systems like the United States Green Building Council’s LEED Rating strategy have gained traction, but still lack critical components of ecological assessment, WOHA has proposed its own rating scale for determining holistic value. Their categories include: The Green Plot Ratio, Community Plot Ratio, Civic Generosity Index, Self-Sufficiency Index, and Ecosystem Contribution Index–five means of measuring the effectiveness of a building development’s performance in terms of sustainability and sociability.

Rather than a manual of schematic drawings for sustainable systems, the colorful and graphically-rich pages are as much an lesson in architectural representation as they are provocative tools for urban development. While a must-read for anyone contributing to the design direction of today’s urban fabric, the inspirational image painted by Garden City Mega City is accessible to a broad range of readers with avid enthusiasm for the future prospects of civilization and its relationship to the earth. 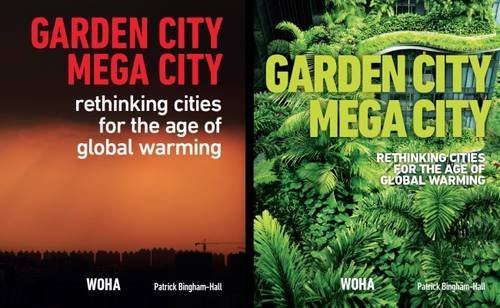