A fresh utilization of data from many sources helps to underscore the gravity of a global dilemma of food waste while falling short of the path and implementation of solutions.

Authors John Mandyck and Eric Schultz peel back the rind on the issue of food waste to showcase the gravity of its effects on not only the environment, but economic and cultural realities across the world. Together, the authors frame our propensity of wasting food as a truly global dilemma, leaving virtually all cultures around the world negatively affected in some way.

“More than 1 billion metric tons of food is lost or wasted, never making it from farm to fork.”

This is the elephant of a statement that begins Food Foolish, a reality that is only becoming more apparent as we see a global population growing in the midst of the increasing effects of climate change. The weight of that figure is magnified when paired with the fact that an estimated 805 million people in the world are chronically hungry or undernourished. From this starting point the book descends into the factors that cause this problem and walks the reader through the effects of food waste, the global cost of which was put at an annual $2.6 trillion by the Food and Agricultural Organization of the United Nations in 2014.

Naturally, there are a series of environmental repercussions that come from the amount of food we waste, many of which have been touched on in this forum before. These can range from the petroleum-based products used to manipulate our crops into higher yields to the resources expended by harvesting, transporting and packing food stuffs. The largest atmospheric fallout is often attributed to the amount of methane that is released from landfills hosting the tons of decomposting food—a gas much more potent in its heat-trapping ability than carbon dioxide.

One thing that Food Foolish has bushels of is data. Mandyck and Schultz pull figures from a number of different organizations from individual countries to the World Health Organization in order to hit home the point of how much devastation the cultural act of wasting food can cause. Maybe too much so. While the book dives right into the numbers for describing the severity of the problem, it lingers here long after most readers would have either signed onto the thesis that food waste is a problem or chosen to put down the book. What could have most likely been consolidated into a chapter or two became a reoccurring theme of representing food or food waste in different metrics, but all saying the same thing.

The thing that Food Foolish could have used a stronger helping of is proposed solutions. In the view of the author, the suggestion that got the most page space was promoting improvements to the supply chain of food transport and distribution. According to the duo of writers, this is where the largest portion of food waste occurs and often due to a lack of resilient and effective cold storage. While developed countries like the U.S. enjoy a vast and intricate system of cold storage that helps protect food and extend its life for consumption, large portions of the world still struggle with bringing these systems to maturity (everything from silos and refrigerated trucks to things as simple as a network of well paved roads).

Despite the fact that cold storage is undoubtedly a net increase in global energy use, Mandyck and Schultz make a fair case for its net benefit to the environment. That being said, for a problem as vast as wasting a third of our food, it was surprising to not hear a larger series of developed options. Other possibilities like portion sizing or local food programs got more cursory mentions towards the end of the book while issues of evolving local cuisine or breaking down the scale of food stores to discourage the bulk buying of Americans saw no mention. Even the champion of cold storage still left the reader with few concrete ways to fund and implement these improvements.

While the book does not specifically articulate the issue, it takes a place within the broader discussion of focusing our sustainability efforts on actions that improve technology or change cultural norms. Without question, there is a place for both, but the key is to remember that both are necessary for significant progress on the environmental front. The book’s focus on cold chain implementation (a technological impact) while skirting the conversation for cultural changes that could drastically effect our amount of food waste makes the presentation seem lopsided. As said many times before in this forum, sustainability cannot be thought of as a technological fix to supplement a wasteful lifestyle.

When it comes to how we grow food, the book also takes a decidedly positive view on the goal of increasing yield and getting more crop out of the ground. There is certainly an argument to be made for larger crops that help depress the price that food can be sold to consumers, especially low income consumers, but these accomplishments have to be weighed against the effects of relying on chemical application and genetic modification. We are already seeing results that can include not only soil quality, but the reduction in nutritional value of the food being harvested and the repercussions on small farm businesses–issues referenced recently by chef Dan Barber in his book A Third Plate.

While the book is well armed with numerical data for bolstering the need for action, its path to actions are less compelling, leaving it to fall short of expectations and the depth that it could have explored over a broad and complicated issue. Similar to A Country of Cities by Vishaan Chakrabarti, Food Foolish could have most likely been a faster and more effective tool as a 25 page white paper that referenced appendices as needed rather than a 198 page book. As a result, skimming the Cliff Notes version may be satisfactory. 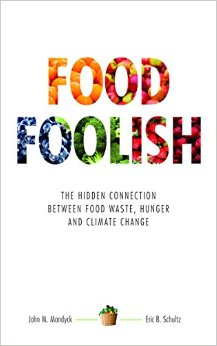