A bold vision of evolution looking both backwards and forwards to build an ecological map for how our country grows and prepares its food.

Some could look at the 20th century as an era of achievement for American agriculture. Advancements in the crops we grow and how we grow them has bred an industry that can harvest more yield per acre than ever before. Companies have streamlined the processes of maintaining and harvesting produce to be ready for an intricate system of cold storage and transportation, all in the pursuit of having more food available in more places with longer shelf lives. But in the eyes of Chef Dan Barber, these achievements have come with costs.

In his book, The Third Plate, Barber takes a look at our country’s quest to produce more food and provide universal access to it across the country. The result has been a culture of farming and eating that is completely removed from the land it is grown on and the ecologies that support it. According to this chef, the fallout becomes not only the sustainability and health of the environment, but the taste and nutritional quality of the food we eat. The chapters of critical research paired with the promotion of a new culinary and agricultural paradigm all revolve around a central question: “What if our ways of eating–not merely a plate of food, but a whole pattern of cooking–were in perfect balance with the land around us?”

Some may argue that the slow rise of practices like organic farming or “Farm-to-Table” are progressive examples of roadmaps to that goal, but the book’s premise suggests that even the accolades of these farming mantras bring muted benefits for bringing viable ways of productively transforming the life cycle of our food. Buying an organic tomato at a local farmer’s market may be supporting best practices of a local industry, but Barber notes it is only a portion of those practices that we are supporting. Tomatoes may be one of four crops rotated through a field in order to maintain soil health, yet the other three often fall outside the pool of mainstream culinary ingredients and may only be sold for animal feed, if saleable at all. The result is indicative of a dissonance between what we eat and what the land can reasonably support.

“In the rush to industrialized farming, we’ve lost the understanding, implicit since the beginning of agriculture, that food is a process, a web of relationships, not an individual ingredient or commodity.”

Barber offers that in our pursuit of growth and expansion, one that began when our country was first settled, we have missed an opportunity for a true American cuisine. To Barber, “cuisine” is more than a cultural fad or even a regularly occurring menu choice, but instead a culinary practice that extends through the farming process to become inherently linked to the land and its local ecologies. In other cultures around the world, the unique components of ethnic foods that we love are the result of dishes built from what the region could provide over time rather than the assumption of having universal access to everything. On the contrary “…without a golden age of farming, and with a history that lacks a strong model for good eating, the values of true sustainability don’t penetrate our food culture” in the United States.

The book examines multiple facets of our food chain: “soil”, “land”, “sea” and “seed”–each offering a chronicle of a history building to current levels of ecological stress as well as examples of new practices that provide balanced paths of growth and preparation of our sustenance. As we continue to realize the depth of change necessary to help our culture sustainably evolve, Dan Barber’s words cultivate broad change that pushes cooks everywhere to align with systems-based thinking that extends far beyond the walls of the kitchen.

Many of the books that have come out to address problems in our food culture cast a dark shadow over the prospects for improvement with grim outlooks for what the future has in store for us. This is part of what makes Third Plate so much more palatable. Barber focuses on specific problems in American agriculture and culinary direction that have grown over decades, but his tone is still a hopeful one. The author takes a care in balancing examples of our negligence in promoting “the ‘culture’ in agriculture” with case studies of how the process can change–how it is changing.

When I heard the author talk about his book, he offered that one of the common questions he receives is how the book can offer a path for improvement for those not trained in the culinary arts. Admittedly, Barber’s journey is told through the eyes of an award winning chef and the meals at his high end restaurants sit soundly above the reach of the average American. Some may say that it is not clear how the innovative perspective that he tries to pitch to fellow professional chefs for creating a new generation of American cuisine translates to hands working the stovetop of home-cooked meals.

While there is a fair point to be made, the lens used to bring the idea of “value” of our food into focus is critical to any substantial change in our habits for planting, growing, cooking and eating. Even if the culinary professionals in the country signed onto Chef Barber’s mantra, wholesale evolution of our eating habits would still hinge on a consumer public that fostered a consistent interest in the holistic quality of its food that encompassed how it was planted, grown, prepared and disposed of.

Without a doubt, The Third Plate is one of the most inspiring and accessible books I have come across in a while. Though the call to arms for providing new cuisines built around local environments is focused on trained culinary world, the underlying message of what comprises true “quality” of our food is applicable to everyone, which is who I would recommend it to. Despite whether or not a reader ends up agreeing with the author’s specific roadmap to change, it is hard to not empathize with the reasons why Americans should refocus on caring about their food. 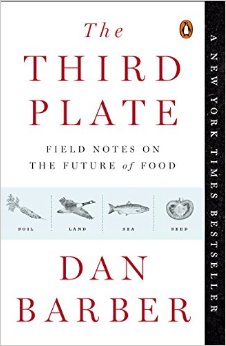