An inspiring recount of a self-driven non-profit that coalesced to promote entrepreneurship, urban planning and street activation from the ground up.

In August of 2017 I was farther away from home than I had ever been–nearly as far as one can be with a starting point of the American Northeast. As part of the Vanguard Program run by Next City, I had touched down on the other side of the world in Sydney, Australia. After a day of exploration and acclimation to the capitol city, I found myself on a bus full of fellow Vanguardians headed towards the city of Newcastle with a bag full of paraphernalia curated by Next City. It was from within that I pulled out a copy of Creating Cities by Marcus Westbury.

I have to admit that knowing nothing about the book or its author beforehand, I was not overcome with anticipation to peel through the pages the first time that I scanned over the title. In the very first moments of my journey with Westbury’s book I naively assumed that its contents contains the well-traveled landscape of place-making and micro-urbanism for the focused audience of urban planners, architects and enthusiastic souls of the public sector that had guided the large number of books, webinars, seminars, expos and videos I had experienced in the past. Lucky for me and everyone reading this, I had a two-hour bus ride to see if my assumptions were correct.

The thing is, Creating Cities isn’t written for architects, urban designers and driven municipal workers (though we all have plenty to learn and extract from it). Westbury wrote his book on the grassroots cultivation of urban culture for everyone else. This makes sense because the recounting of his tales of guerrilla urbanism and attempts at activating the post-industrial landscape of Newcastle did not rest of the participation of seasoned, specialized professionals, but everyone else. The comfortable and casual tone of the author’s prose moves through his experience of confronting the dilemmas facing struggling post-industrial cities, but more importantly, the unconventional model of locally-oriented, resident-focused initiatives that grew as a response to creating action in communities that the conventional free market had left behind.

While Westbury’s story is a unique, the attributes of the canvas that he started with are not. The industrialized world is riddled with the towns and cities that give a face to the fallout of the manufacturing migration that dominated the end of the last century. As this forum has written about before, the post-industrial city bears as many opportunities as it does challenges, but the critical mass to overcome the forces that keep these former urban machines held in amber is often difficult to overcome. Sustainability is part and parcel of this conversation as each city represents a huge cache of materials and latent energy primed for a second life. Westbury approached the problem from a different direction.

The goal of activating struggling urban centers is a reoccurring one in the professional realms of architecture and urban design (this reviewer included). It is easy to theorize about solutions for municipalities that suffer from things like a declining tax base, low employment rates and disinterested looks from outside companies looking in. It is harder to get hired to actually deploy those theories and skills, particularly because the reality for a town struggling to fund its schools is that hiring professionals to assess its landscape can be a luxury outside of its capabilities.

The same is true for its local citizens and business owners. When confronted with the desire to help the city of Newcastle, Westbury quickly arrives at the funding barriers to bringing in those trained to propose design solutions from the top down. The author notes “there is little latitude for amatuers–be they the owners or the potential users of vacant spaces. They literally cannot comprehend what they need to do without paying for the advice they often can’t afford.” Even then, many of those professionals would not also function as the facilitator to help turn those ideas into realities. As a backdrop, this becomes yet another attribute that helps bind these townships in stasis rather than productive evolution. Faced with this, Westbury chose a different path of trying to create a framework that could connect people possessing time, passion and talent with a space to foster creation and activation.

“With limited resources my best trick in making them work was a simple one: find people with talent, and become the means through which they are about to do things that they would not otherwise be able to do. Find people whose work you believe in and give them the tools, the promotion, the venues, the contexts, the networks and the audiences to try something they might not otherwise try.”

In Westbury’s mind, activating the downtown could be facilitated by locals that wanted a chance to pursue their own enterprises while simultaneously activating vacant space. The result would be new businesses, fewer empty storefronts and activated sidewalks. The framework for self-driven change becomes “Renew Newcastle,” an organization of locals that aligned itself to helping to provide the missing pieces between talented, driven people and the facilities needed to leverage that talent. Though the organization represents a unique experience of grassroots efforts, the methods of Renew Newcastle and its underlying mantra of flexibility can be the starting point for any local population.

Creating Cities is a fascinating story that holds all of the necessary information to embolden local populations across the world. Westbury’s accounts shine a light on all that is possible from a group of dedicated residents that remain committed to leveraging their skills in a collaborative ecology. After having the opportunity to not only finish the book, but walk around the present reality of Newcastle, I am left with two open thoughts for the author’s musings.

In many ways, this book outlines a series of tactics for how non-professionals can embark of improving and activating their neighborhoods without the help of design or business professionals. Given the number of localities suffering from the same dilemmas, this is a valuable skill for building individual strategies everywhere. At the same time, are there ways that the knowledge within can be harvested and utilized by architects, urban planners, urban designers, municipal agencies and entrepreneurs to re-orient their attack on the problems from the opposite direction. I would be interested in knowing how Westbury would recommend how someone coming in from the other direction should rollup their sleeves. If I was a young(ish) architect with experience, access to capital and creative ideas how do I plug into the author’s game plan? By no means does Westbury encourage the professional world to stay out of the conversation, but we may be able to be better at engaging communities when armed with this perspective from the other side.

The other query is: how does this method of community activation affect its trajectory in relation to gentrification? Does it at all? Though not a focus of the book, it is interesting to look at downtown Newcastle a decade after Renew Newcastle began its efforts and hold it against the goals of its founding. Newcastle has enjoyed significant development over the past ten years and likely stands as a markedly different environment than the one identified in Westbury’s youth. Hotels, new university buildings, restaurants and a new light rail sliding through the central core are all evidence of economic improvement for a healthier urban corridor.

Yet at the same time, my walks through the downtown also saw entire city blocks being purchased by developers that were once so reticent to invest in Newcastle’s future. Whispers of new penthouse apartments with aspirational selling prices of millions of dollars were a surprising reality for a downtown that was searching for pedestrians not that long ago. Is this the Newcastle that Westbury was hoping for? Did Renew Newcastle help set the city on a path towards inclusive urbanity or did its activation merely expedite its transition to a gentrifying force that could price out the very people that were responsible for its resurgence?

In various passages, Westbury leaves this as an open question as well, but as the prospect of reactivating more post industrial cities becomes en vogue manuals like Creating Cities can give us both strategies for experimentation and the foresight to think about what measures need to be laid in on the urban level to preserve and guide growth in the best interest of its residents. 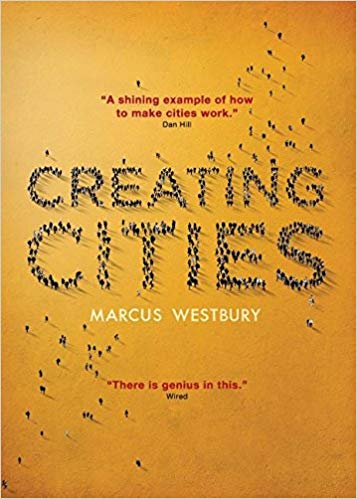