A collection of essays that frames relative youth of sustainability's efforts surrounding the growing and distribution of food that reflects itself in the amount of progress still needing to be made in affording those goals to a broader cultural and socio-economic audience.

The voice of sustainability and environmentalism has repeatedly struggled with the retention of its message by those outside its group of core proponents. As environmental threats increase in their intensity, so too does the urgency of the pro-environmental message–an urgency that can often be misconstrued as aggression that only emboldens its opponents. Though every cultural issue can have its sides of passionate advocates that seek to strengthen the resolve of fellow believers, the environment has become particularly prone to a preaching to increasingly siloed groups of fellow proponents rather than bridging the divide(s) that defines the stalemate between factions. Even more so in light of our country’s new President and his perspectives on environmental policy, the walls of the green echo-chamber may be getting stronger rather than more encompassing.

At least part of this issue is one of diversity. The conversations gathered by the editors of Cultivating Food Justice are a timely reminder that we must be increasingly cognizant of who comprises the voices of sustainability, making sure they hail from a growing number of locations, languages and backgrounds rather than narrowing to the over-refinement of a driven, but homogeneous, composition. According to the writings herein, we still have plenty of work to do.

The collection of entries calls attention to the fact that the clarion call for higher standards in the environment and the food we eat come from a predominantly white, upper-middle class electorate rather than a more representative cross section of the population as a whole. What makes this worse is that our environmental transgressions (both current and historical) can negatively affect poorer or minority groups more than their wealthier counterparts coordinating policy.

“…many of the discourses of alternative food hail a white subject and thereby code the practices and spaces of alternative food as white. Insofar as this coding has a chilling effect on people of color, it not only works as an exclusionary practice, it also colors the character of food politics more broadly  and may thus work against a more transformative politics.”

The book’s authors repeatedly draw focus on minority, immigrant and indigenous populations here in the U.S. that become the unwitting recipients of anti-environmental policy. Whether it be the Japanese, Laotian and Cambodian immigrants to Californian farmland or the Karuk Native American people of the Northwest, restrictive legislation that harms the natural environment can exert undue pressure on specific communities–the irony being that these same communities strive for a more sustainable paradigm than the American status quo yet are thwarted nonetheless.

It is not a stretch to believe that the long term success of integrating sustainability into the American norm could hinge on the movement’s ability to be an inclusive one.

Though the book focuses on primarily on the topic of food, the issues highlighted by the various authors are all only a step or two away from the broader conversation of social and environmental equality for who will bear the costs ecological improvement and who is first to enjoy its benefits. It is not uncommon for poorer communities to be the first choice for hosting infrastructure deemed crucial to an evolving ecological awareness even when its construction will benefit wealthier neighborhoods. If the added cost of environmental measures are deemed not only necessary, but holistically beneficial then how are those costs distributed across citizen’s ability to pay them?

For those particularly interested in the topics of food justice and how our growing aspirations of health and wellness can reach the entirety of our populace, this collection of works is a good sample of relevant issues along with groups with active efforts to improve the current landscape. However, given the clear parallels to be drawn between our agricultural reality and other sustainability initiatives, the book is worth a read for anyone who is engaged in these areas and a desire to help the conversation spread to a wider electorate. I wouldn’t call the book a “light” read, but its pages include many poignant historical events and well-framed analysis that are as relevant now as they have ever been. 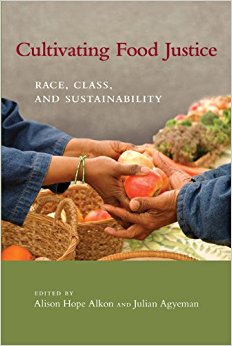